The population of Baralaba is ~ 350 people.  Come and visit the upgraded hotel, foodworks, hardware, newsagent, cafe (with limited hours), fuel station (fuel available mid week).  Step back in time ad visit the Historical Village which is open by appointment.
​As the most western town in the Banana Shire, Baralaba shows up on the map as being a fair distance from the bigger towns of the Shire, but on a well-worn path to outback Queensland.  You know you’re on the right track when the iconic Mt Ramsay appears in the distance.  It directs all traffic towards the town which is officially named for this ‘High Mountain’.  Depending on which local you speak to, you could also come across other meanings such as ‘Land of the Blue Mountain’, or ‘Bottle Tree’.
Home | Menu 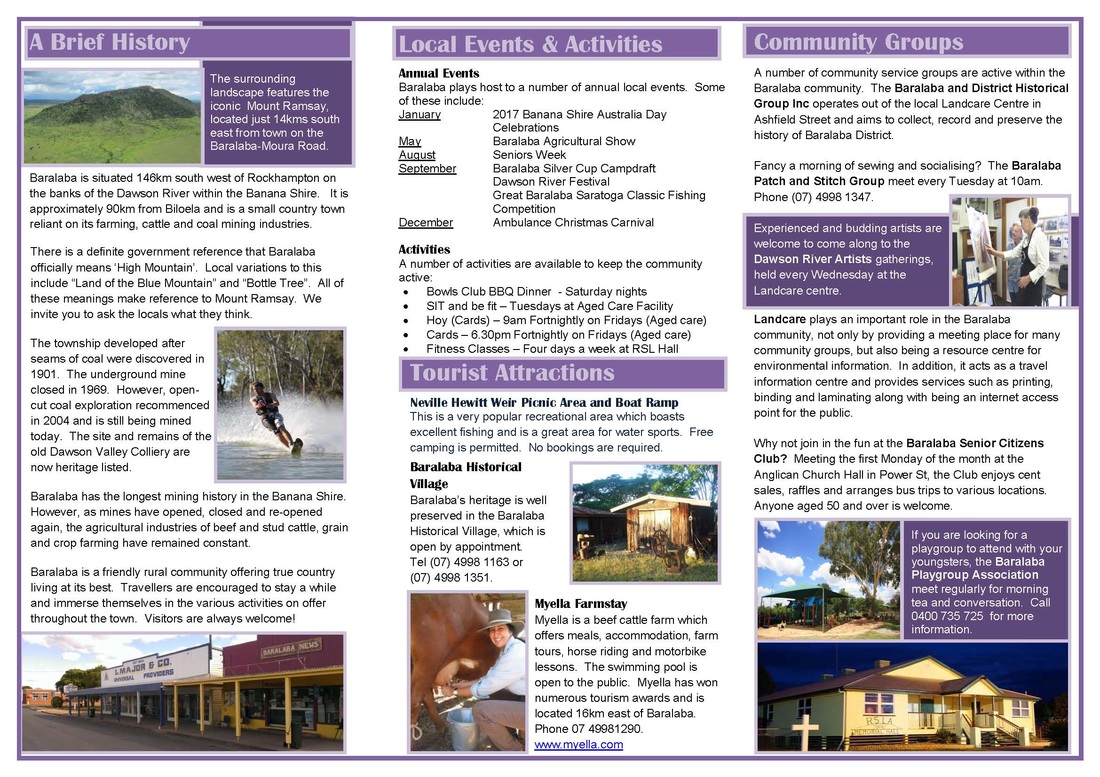 ​Historically, the Baralaba district was home to many Dawson Valley settlers in the mid-1800’s and came to importance as a town in the early 1900’s.  Coal mining and the need for a railway system to transport that coal dictated the opening of the Baralaba railway in 1917.  Unfortunately there are no longer any rail connections as the line from Theodore through to Mt Morgan was closed in 1987.  However, sealed roads and an all-weather thousand metre airstrip for medical emergencies more than compensate for the lack of a public transport system. 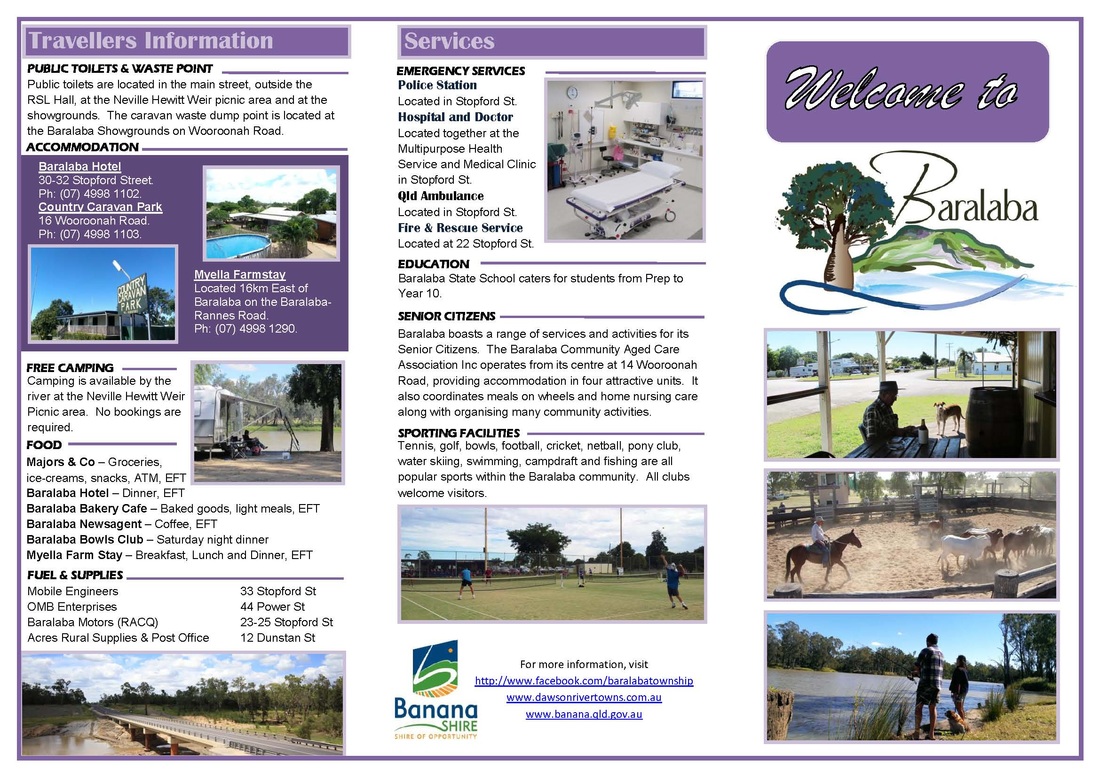 What does remain of the underground coal industry is now Heritage Listed and situated at the northern end of Power Street.  The old Dawson Valley Colliery is historically significant for its state of ‘benign decay’, with some buildings and equipment remaining intact and others in ruins, from when Mt Morgan Ltd closed it in 1969. Current owners of the site, who offer employment in their modern open cut Baralaba Mine, are working, along with the Baralaba and District Historical Group Inc, to open the area for public inspection with safety fencing and interpretative signage.

Of further interest in heritage terms, is the Baralaba Historical Village, situated back in the town area on what was formerly railway land. Early buildings of the town have been moved on site and are equipped to show what life was like in the early days of Baralaba.  It is an ideal place for quiet browsing and reflection on times past. It is privately owned and open to the public by appointment (Phone 49981163 or 49981315).

A pleasant walk along the length of Baralaba’s Stopford Street will give you an insight into the life and times of Baralaba’s businesses and homes.

The Baralaba Hotel (Phone 49981102) provides typical country hospitality to locals and visitors.  Drinks, meals and accommodation are always available and have been since the late 1920’s.

Major’s store offers old fashioned service and friendliness, being operated by the same family since 1944, and providing banking, an ATM and EFTPOS facilities.

Along with a newsagency, coffee shop and garages are the local Ambulance, Fire and Police stations.

At the southern extreme of the street is a modern Multi-purpose Health Centre which, in 2011, replaced the former Cottage Hospital built in 1927.  Attached to the Centre is a private doctor’s clinic and pharmacy, along with a heli-pad for emergency patient evacuations.

The Landcare Centre (Phone 49981142) on the corner of Stopford and Ashfield Streets is a good place for information and internet access, as well as being the home base for the Baralaba Art Group with art work on display and for sale.  Also based here is the Baralaba and District Historical Group Inc with its large digitised collection of photographs.

At the eastern entrance to town, you can’t help but notice the huge shed and transport complex of Curtis Carrying, just before you come to the Baralaba Showgrounds.  Further on is another useful one-stop shop just opposite the Baralaba Tennis Courts, in the modern Acres Rural Supplies complex, which also houses the Baralaba Post Office.

At the western entrance to the town you should look to your right as you cross over the new, high-level Baralaba Bridge over the Dawson River and take in the Neville Hewitt Weir, completed in 1976.  This provides an abundant supply of Dawson water for the towns of Baralaba and Woorabinda, irrigators and property owners, and a handy backup of water for drought years.

As you move further into the town you will pass the very sociable Baralaba Bowls Club, where visitors are welcome to play and also to take part in the Saturday evening barbecues.

Continue through Stopford Street to the southern end of the town and find the Neville Hewitt Weir Picnic Area which supplies a wonderful recreational playground with visitors being most welcome to share its beauty.  The picturesque camping area among the shady gum trees is well-established with toilets, showers and picnic areas.  Across the river on the western bank is the 9-hole grass green course of the Baralaba Golf Club.

The concrete boat ramp into the placid waters of the Dawson allows for water skiing and fishing throughout the year, with a highlight being the annual Saratoga Fishing Classic held in September/October.

If you are not into camping and caravanning, but still like to travel, then your choice could be to stay for a while at Myella Farmstay (Phone 49981290), just east of Baralaba.  It offers unsurpassed home cooking and accommodation.  You can just relax and breathe in the country air or take part in activities such as milking the cows, trail bike riding and horse riding, along with the friendly and relaxing talks around the campfire after a busy day.