The 2019 team: Shane Clanfield has been a great asset to our team and worked with us for over 15 years!  Lyn and Carl in centre.  Trevor Wells on right worked with us for over 6 years.  Dale Jensen front left is a great all rounder and Peter and Olive are the founders of Myella.
HOW  THE FARM STAY BEGAN
Peter, Olive and their son Ken ran another business, besides fattening cattle on their farm.  I, Lyn  was also living at Myella but was just the youngest daughter.  They had some seasonal harvesting work, harvesting wheat and other grains for farmers.  During the busy seasons they employed a couple of backpackers who were already farmers in their own countries and they helped us with some of this seasonal work.

After the harvesting business stopped, Ken met an Irish couple.  They told him they had asked a farmer if they could ride his horses and he had laughed at them.  Ken invited them to Myella and we all had a great time.  Olive organised a fund raising dinner at Myella as she loved to cater for people.  Barbara (the second child) and Derek (a Sydney guy who worked for us also told us how city people would love to experience the farm.  I (Lyn) saw our men (family) explaining some of their work to a Sydney resident who didn't understand what we did - I felt frustrated that my Father and Brother were not able to explain it in a language that this city slicker could understand.

Later, Lyn travelled to Thailand and invited some English travellers to visit Myella.  She started to think about what would have been of interest to them, but they never came.  She contacted the YHA in Rockhampton and told them of her idea.  When she travelled home on the weekends from her work in Rockhampton, she would invite foreigners to come with her.  They would pay fuel costs and she would share with them our country life.

At this point Peter was 60 years and Olive was 50 years old and they were supportive Lyn's idea.  Peter enjoyed building the infrastructure and the intellectual conversations the guests brought to the table, Olive enjoyed catering and organising everyone.
TORENBEEK PLACE is the original home moved in pieces to this farm in 1937 by the Torenbeek family who raised a family of 5 children until 1962. Then the farm was purchased Robert "Harry" Ellem and 5 years later his sister Oriel and husband Sid Tucker moved their family and share farmed the land.  Then in 1968 the Morretti family owned the house and farm until they built the white house in 1984.  Olive and Peter and Ken purchased the land in 1985.
The original idea of Myella Farm Stay was to share "our country lifestyle".  Some things have changed like the building of a swimming pool, air-conditioned bedrooms and an outdoor dining area; also helmets and rules for safety were introduced.

Although there have been many changes since it all began in 1993 - the great atmosphere still remains and the people of Myella still enjoy hosting their guests!
10 THINGS THAT HAVE CHANGED SINCE THE FARM STAY BEGAN IN MARCH 1993

2.   We now get mentally exhausted rather than physical exhausted

4.   Horses are now ridden every day and for no reason

5.   Our guests are the priority not our farm jobs

6.   We know more about Australia and other countries

7.   We now eat outside, and yes we do have an oven in our house

8.   We no longer have a lot of time to participate with the local community

9.   It now takes forever to prepare and eat a meal 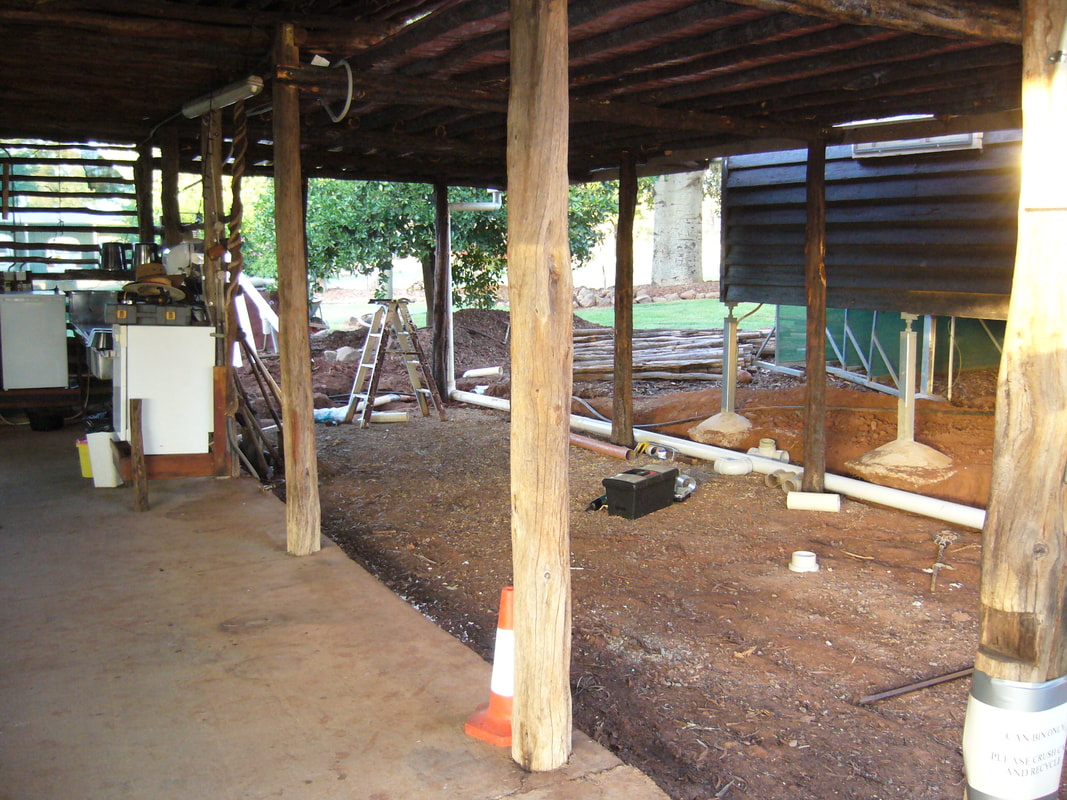 First Farmers | Our Ancestors
Progress from our beginning in March 1993 until now:

1993 March Our first guest was French she told us not to change for the visitors.  She talked agro-economics with Peter, slept in our house, got out of bed at 10am then sat around and discussed many topics about farming, subsidies , cattle, trucking animals., water, you name it.  She told us she could ride a horse, then tried to get on without the reins and nearly fell off a very quiet stock horse.  It was an interesting experience for all of us and has continued to be so.  It was more than a month until the next guests came.

1994  The farm stay was a hobby, 2 guests came every week.  Lonely Planet came to visit. As well as running the cattle farm Olive and Peter drove school busses twice a day and Lyn worked casually as a teacher assistant at the Baralaba State School.

1995   We renovated the interior of the guesthouse and then a storm blew the roof off.  Barb and Derek got married on the farm.

1997   Numbers increased 80% of our work was entertaining the guests. We raised a kangaroo and had young farm animals but none as popular as a joey.  Peter had heart surgery.

1999   Built outdoor eating area as there was no room in our house for meals any more.  Peter hurt his knee, Lyn broke a bone in her leg. Got a dozer to build another dam to cater for the larger water usage. Drought.

2000 Peter and Olive celebrated 35 years of marriage.  Purchased more horses. Continuing to buy and sell cattle.  Some guests return, now averaging 9 guests per day.  Alwyn worked here casually and helped design the outdoor dining area. Storms damaged the cloths line and killed on of our milking cows - a tree fell on her.  Build 10 more horse stalls and extended the shed.  Cattle are expensive to buy not a lot of profit in the cattle market.

2003 Peter had a huge 70th birthday party. Drought broke we got 10 inches of rain in 10 hours! Expanded outdoor dining area.

2005 The farm is looking great as we had good rain.  The horses and cattle are fat!   Peter and Olive holiday in Tasmania.  Built smokers hut, paint the rooms and put in air-conditioners.  Renovate kitchen to stainless steel commercial kitchen.  Lyn and Shane went to the Commonwealth Games.   Lots of staff needed to help. Merged 2 school busses into one.  Lyn involved in tourism committees.

2006 Lyn has knee reconstruction.  Kids inherit the farm and Peter and Olive continue to work at Myella as they please.

2007  Got a new dog Toby.  Got some blade ploughing done.  Not a lot of rain but cattle are growing well.  Formal family meetings.  Started vegetable garden, extended chicken pen. Painted and renovated Torenbeek Place and build staff rooms.  Became a YHA.  Did a horse training course with Horse Safe Australia.  Entered in Queensland tourism awards - got a mention.

2009  The family has some serious succession business meetings that don't go well (from Lyn's perspective).  Lyn begins dating at the age of 38 years!.

2012 Lyn is given a free house and moves it to Myella, Reg and Philip Abbott make it liveable. Baralaba township gets a new bridge.  Olive got a new knee.

2013 Shaun builds a huge vegetable garden. Olive turns 70 years and Peter turns 80 years. Huge flood in January.  Electricity gets expensive.
2014 Peter has more surgery on his heart.  Guest mostly are from Germany, Holland and France and some contractors staying with local work.

2016 No rain and the farm is getting dryer, purchase more ensuite buildings. Now have 6 washing machines, 15 milking cows, one dog, two talking parrots.

2018 Insurance will no longer cover motorbike riding.  Farm stay celebrates its 25th Birthday.  Olive is diagnosed with Alzheimer's.  Peter had a stroke and after months in rehab managed to to return home and remain living at Myella with help from Olive and his family :)  Peter purchased an electric scooter and escorted the guests to the sunset and he could still recite his poetry and could also manage the finances.

2019 Peter passed away in October surrounded with his family aged 86 years.  He would have been disappointed as he wanted to last until December so he and Olive could celebrate 55 years of wonderful marriage.  He was living in the farm and still entertaining guests with his stories and poems until he went to hospital where he died.  Severe drought all over Australia and Myella is also effected.  In addition many significant grasses like buffel grass have die back, drought conditions motivated us to water many significant trees.  Kitchen and booking system upgraded and now on line.

2020 Carl and Lyn get engaged in December at the Myella Sunset Point.  Earlier in the year they attended a land, grass and cattle management course.  Olive continues to help in the garden and with catering.  Shane after 16 years of loyal service as member of the Myella Farm Team was made redundant with the effects of Covid-19 on travel.

​2021 The fun continues! Lyn turns 50 years old and is surprised with a party Carl organises and a wonderful 2 nights at the beach!  Carl and Lyn buy cattle, Olive continues to live well although changes are made to simplify things so she can continue to live on the farm.  Olive walks regularly, takes medication, eats well, and continues to help/work.  As a result we have sold our milking cows (a very sad day for us)  We've ALWAYS milked a cow, we have ceased being a release home for orphan joey's.  Lyn begins cycling.

2022 Olive raises over $10K for Dementia Awareness.  Carl and Lyn register their own cattle brand participate in many on line regenerative grazing schools and workshops.  Some farmstay guests hosted as we are honouring bookings from prior to covid.  All other bookings are for people working in the area requiring accommodation only.
BUILDING HISTORY
TORENBEEK PLACE is the original home moved in pieces to this farm in 1937 by the Torenbeek family who raised a family of 5 children until 1962.  Then the farm was purchased Robert "Harry" Ellem and 5 years later his sister Oriel and husband Sid Tucker moved their family and share farmed the land.  Then in 1968 the Morretti family owned the house and farm until they built the white house in 1984.  Olive and Peter and Ken purchased the land in 1985.

KENS COTTAGE building was moved from Baralaba in the 1998 build with timber from local sawmill in the 1960's by the man who established the sawmill.  The cottage has 2 bedrooms with 2 adjoining bathrooms.  Another family lived in the cottage in the late 1980’s while they saved money for a new house.  The cottage was then left as a storage building.  Ken Eather bought these buildings in 1996.  He put the building on a truck and moved it 16 km to Myella.  Ken has done all the renovations to both Ken’s Cottage, Torenbeek Place and The New Wing.

ORIGINAL ENSUITES with PRIVATE BATHROOM Two rooms with their own private bathrooms and veranda.  These are the biggest rooms on the farm and have a few more windows.

​ROMA was moved from Roma on a truck in ~ 2015 it was a portable building used with the gas pipe project.

BAUHINIA buildings were purchased during an on line auction!  We went and inspected one and Lyn said, "no Dad they are ugly lets not buy it", and he bought 2 of them!
Home | Menu