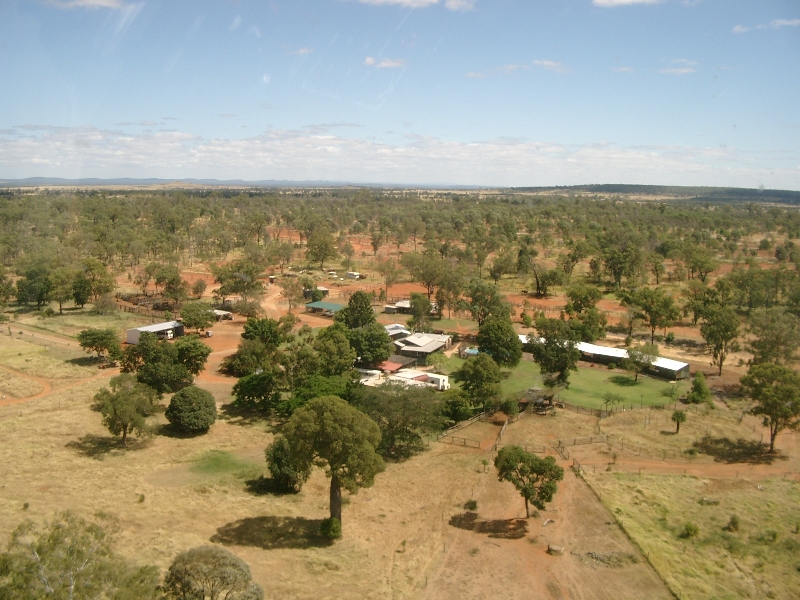 Cattle are sold for the beef markets in Australia and other countries i.e. Japan, Korea and USA and somtimes the cattle are sold to other farmers.
The family also utalise the land to produce milk, eggs, beef and a number of fruit and vegetables.

The History of Myella is written in a BOOK!

The farm was won in a land lottery in 1935.  Details about the start of Myella Farm is described in a book LIFE IN THE SADDLE by Alwyn Torenbeek with David Gilchrist.  Chapter one is called "The Birth of Myella"  http://www.penguin.com.au/products/9781742536828/life-saddle-adventures-legendary-horseman-kokotunga-kid#.UbcKPRBgYzA.facebook

A Mud Map of Myella Farm

BRAHMAN  CATTLE originated from India and were introduced to Australia because they were better suited to hot and tropical climates by breeding zebu cattle to European beef cattle.  One of the first Brahman cross animals in Central Queensland was taken to a cattle competition in the  Rockhampton show.  It was judged on its suitability for the export meat market.  The animal was first judged visually, and was said to be the least suitable for export.  The second part of the judging required the animal to the slaughtered and judged on its meat quality. It was awarded second prize!
Brahman cattle have endured famine, insects, pests, diseases and extreme temperature throughout their evolution. The hybrid cross between Indian/USA and European is an effective breeding mix as they grow vigorously and are very common in Central Queensland.

Location
Myella” is located about 125 kilometers to the south west of the regional centre of Rockhampton. Surrounding areas are predominantly used for cattle grazing and farming. Access to the property is via a bitumen sealed single lane road providing good access to the property. Services to the property include rural power, telephone, twice weekly mail, primary education at Baralaba with school bus available.

Fences
The boundary fence comprises predominantly four barbed wires with rosewood posts. A five kilometre section on the western boundary has been renewed with four barbed wires and stingy bark posts.  In total “Myella” has approximately 37 kilometres of fencing, mostly in fair condition.  The property is fenced into 16 main paddocks with a central laneway. Internal fencing comprises mostly sections of four barbed wires with rosewood posts, in fair order overall.
Water
The property has good water supply for stock and domestic purposes from the Benleith Water Scheme. This water is reticulated through an underground poly line to three paddock tanks and approximately 10 troughs.  Three dams provide further permanent water for stock and domestic uses.
Soil Types
The land comprises a mix of easy rising softwood scrub soils throughout the northern half of the property, running back to the south and rising into a harder red rocky central ridge, before again falling to the east, west and south to softer country of black and loamy soils.
Tree Types
Include broad and narrow leaf iron bark, sandalwood and bloodwood on the harder county, with bloodwood, yapunya, Moreton Bay/crows ash and wilga in fringe area, and balance of brigalow with some blackbutt and bottle tree influence.
Land Types
Red Timbered Ridge
Country West from ridge to cleared scrub Ironbark country fringing the ridge cleared brigalow scrub undulating and cleared country from NW corner fringing forest country
Harder Central Ridge
205 hectares a low rising ridge is located centrally on the property starting in the southern corner and extending through to about the mid section of the property. Soils are predominantly light and red with some rocky outcrops in higher areas. Timber types include strong shadings of narrow leaf iron bark, bloodwood and sandlewood particularly in the northern parts.
Pulled Brigalow
410 ha comprising the majority of the northern part of the property, being mostly pulled, raked or cleared Brigalow country with some bottle tree influence. Predominantly scrub soils with some downs influence in the north western parts as the land rises into Wallaby Hill. Mostly Buffel pasture. Leuceana 40 ha Planted Leuceana on black soils with light shadings of brigalow and some bottle influence. The land runs up to the east on to the central ridge. Overall good pasture and productive ability.
Yepunya Flats
250 ha Consists of a the areas to the south and east of the central ridge and comprises predominantly cleared land with a light shading of yapunya and some brigalow influence in the eastern areas. Soils are mainly loam running into clay. Mostly buffel pastures and overall fair to good productive ability.
Grass Lands
144.95 ha Balance lands mostly consisting of fringe areas around the central ridge and comprising lighter soils with timber types including broad and narrow leaf iron bark, crow ash, Morton Bay Ash and some bloodwood.  Generally lighter in productive ability.