You will definitely see kangaroos while staying at Myella.  Over the years we have raised and released many orphans.

We are part of the Gladstone and District Wildlife Carers Association Inc. ​At times we release animals cared for by other members.  We don't always have a joey for you to feed and nurse, but there is almost always one in our garden learning life skills. 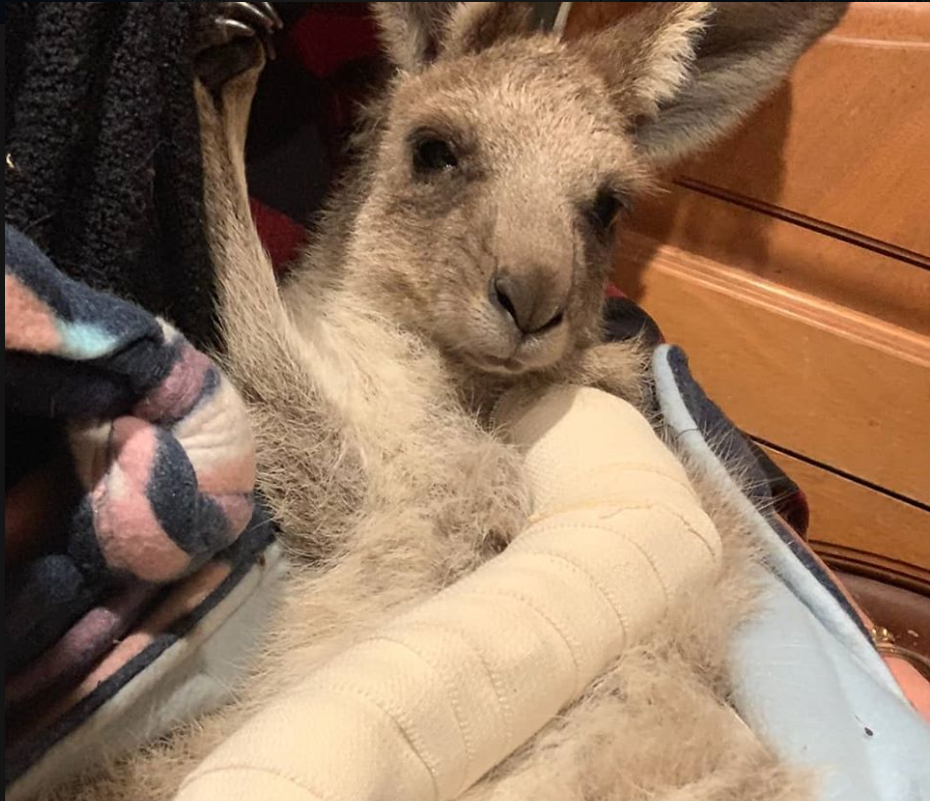 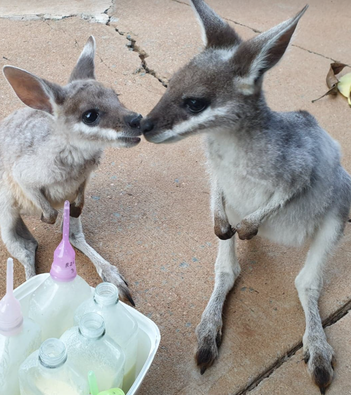 The orphan joey's we care for have often lost their mother due to a car accident.  When the joey's get older we stop feeding them and encourage them to return to the wild.

​In the paddocks you will mostly see Eastern Grey Kangaroos although living on the property are also Rufus Betton (Kangaroo Rats), Whip Tailed Wallabies and some Red Shoulder Wallabies.

​​​When it doesn't rain kangaroos often eat the grass near the roads and sometimes are killed by cars.  Joey's who survive the accident are often brought to Myella by people who find them orphaned.

​Guests are welcome to help bottle feed the roos with the special kangaroo milk called  "wombaroo".  The joeys live free and can go when they like. They usually leave after 10 months of age, and sometimes hop away for an afternoon and come home the next morning really starving. Once they “leave home” their appearance and behaviour changes a lot and sometimes we can’t even recognise them.

​​Now that we have raised more than 100 they seem to hang around the farm more as they have enough of a mob, however we are more keen for them to move further away.  We have raised mostly Eastern Grey Kangaroos.  But we have also helped a few whip tailed wallabies, swamp wallabies, a kangaroo rat (Rufus betton) and in 2006 a western red kangaroo.  It's exciting to raise a different species as they are all different.

Here is a lovely story written by our guest  Julie The Texan.

Hey guys...I thought you might get a kick out of this.

So two nights ago, completely exhausted, I pulled my swag out onto the lawn just out of Stubby's (the cow dog) reach, about 30 yards from the chicken
coupe and the milking cows stall and well away from the stables.  Most of the horses were way out in the surrounding paddocks so I only heard the occasional whinny...not enough to keep me awake. more annoying was stubby's crying for attention.  So, I pulled my swag a little closer so he could lay beside me and be quiet but of course that is not exactly what happened...you know, the licking and pawing and pawing and licking...so neglected!  So I got up once again and moved out of his reach, rolled over, pulled the covers up around my neck and went to sleep.

I don't even think I got the chance to start a really good dream before my hair is being pulled out from the roots! what in the #*$%@?!?!

Oh, never mind...it's just Midget the pregnant kangaroo who has decided that I need to be groomed.  And how do I feel about that?  Not now!  So I pulled the sheets up over my head to protect the precious hairs that are taking so long to grow as it is.  I can't breathe but that's okay.  I have more important things to worry about like the fact that now midget has decided that she needs my pillow more than me...I disagree and hold on tight. surely she will give up soon...don't these crazy animals sleep?

Ahhhh...finally I can hear her bouncing away ...but not far enough...now she is trying to get into my swag from the other end!  At least that side is well sealed...no luck for midget! yea Julie! but not for long...this is one determined roo...since she can 't actually get inside my swag and she can't nest in my hair she decides to jump right on top and arrange her nest there. never mind that my bum doesn't really "rearrange"!

She tried several times to lay down on top of me but she kept rolling off, freaking out, hopping around and trying again. after about 5 tries she gives up and curls up beside me on the ground and...yes...sleeps! yea for Julie! no...wait...she wasn't sleeping!  Just resting so she could gather the energy to go through the entire routine

AGAIN! by this time stubby has woken as well and believes that we are playing. How dare I give my attentions to another animal! he was quite
upset and let me know all about it.  So now it's not just my lack of sleep I am worried about. I am afraid everyone who, perhaps wisely,
decided to sleep indoors will be kept awake as well...but the well being of others quickly leaves my mind as I return to the reality that there is
a bloody kangaroo hopping all over my swag! she finally fell asleep while trying to gather energy to rework the routine so now I can sleep as long
as I don't get the crazy idea to change positions.

By the time the sun came up I was well over the novelty of the situation and was begging her to go away. Peter and Olive were up now, tending to the breakfast fire and getting a good laugh out of it all.

That afternoon when we returned from taking the cows out to pasture I found the little devil sleeping in the shade next to the swimming pool. Well I
couldn't very well let that continue! turn-about is fair play!  However I was much more gentle about the whole thing...stroking behind the ears...
scratching under the arms...she put up with it for a little while then jumped up and started furiously scratching her pouch carefully avoiding the joey inside.

​I was thinking...hmmm must not be too pleasant in there at the moment. then she grabs hold of her pouch with both hands, pulls it
open, and sticks her head in there! what in the %#$@*&? she's cleaning it out! and then she continued to hold her pouch wide open while she pulled her head out for some air. I peeked inside and saw the tail of the joey the size of a mouse!!!!!! how amazing!!!! I ran inside to tell the family
who lives on the farm and they couldn't believe it!  Evidently I was the first one to see the baby!

They figure that she must have trusted me after spending the night trying to nest in my hair...so Lyn decided that she is going to start sleeping outside too.