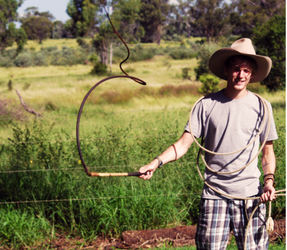 ​Most farms have a stock whip but they are rarely used.  We enjoy teaching our guests how to crack a whip.  It's a fun thing to do, to make a sonic boom with your hands!
​
Whip cracking is the act of producing a cracking sound through he use of a whip.  It was used during livestock droving days when large mobs of cattle were being walked from town to town.  The horse rider would crack a whip to make a sound to keep them moving, rarely does the whip ever hit the animal and it is never done in anger.  Nowadays it has become an art.

Ever wondered why a whip cracks?  It is all to do with the release of stored energy, at a rate beyond the speed of sound.  It is the loop itself that generates the sonic boom.

We also offer fun lasso lessons and we can teach our guests how to do some fancy tricks with a simple rope. 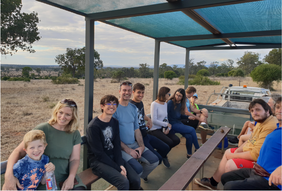 See the cattle living freely in the nature and learn about the trees and grasses that are on the farm.

We will share some of the history and how Myella farm was won in a land ballot in 1937 and how it like all the farms in this area were developed into a dairy farm for the cream to be exported to England! 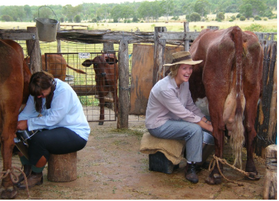 Join the cow milking team.  Our family have always hand milked a cow who supplies milk for the household.  We also let her raise her own calves, these are called our "house cows".

You can enjoy this fresh milk during your stay, however it is pasteurised for the health and safety reasons (compulsory by law).  Occasionally we make butter and cheese.  Mostly we  use the milk and put the cream from the milk in the mashed potato that we have for dinner and custard for our apple crumble deserts.

Not a lot of farmers let people milk their cows.  The slower the milking is done increases the likelihood of the cow getting sick and of course less milk.  At Myella we have systems in place to prevent such problems, including the use of a small electric milking machine which was purchased in 2015 to assist the milking team.  So come and give it a go.