History In The Making

This page is a work in progress.  ​​When you exit these links BACK ARROW in your browser so you'll return to this site. 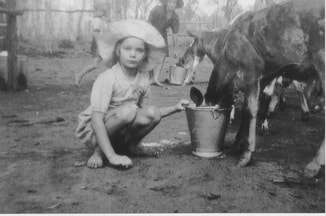 I was just six years old when we arrived at the site where this house stands.  There was thick scrub surrounding a small clearing, in which the timber was stacked, waiting for Bill and Bert to start rebuilding the house.

We had a small shed, as a kitchen, and tents to sleep in.  the dingoes use to come in very close and howl nearly all night every night.  They were probably after Gracie, the goat we had acquired from somewhere, for our milk supply.  But they didn’t get her, the men saw to that.

The men got to work immediately on the house – they worked from daylight to dark and in 14 days it was ready to live in, but not lined until some years later.

The next step was to clear the scrub back further from the house.  We became aware of large brown snakes into the area and they became a constant danger for years.  Two or three ever day in summer was not unusual and they were very aggressive.  Our dog Nigger helped our mother keep them at bay.

Mum and Nigger killed all that came near the house.  There were also a large number of goannas, and every now and they there was great excitement when Nigger put one up a tree.  There were hundreds of wallabies here too, and lots of scrub turkeys.  Bert was a good shot and if meat was in short supply, which it often was, he would bet a turkey to tide us over.  He used to set snares in the scrub to catch the wallabies.  When Daphne and I realised what he was doing we used to go along later and pull the snares.  So, it would seem that Daphne and I were part of the first movement for the environment.

For a number of years all of our bread was baked by our mother and the butter made in a churn.  I remember people enjoying this homemade bread and butter when they came.

The goods train came out from Rockhampton three times a week, bringing mail and grocery orders from Thomas Brown and New Zealand Loan.  I can remember unpacking the orders and seeing big tins of prunes and other tinned fruits and vegetables.  As the roads improved and the car tyres improved to, our grocery orders mainly came from Mr Les Major in Baralaba.  A bread delivery from Baralaba three times a week came as a relief for Mum.  But she would still bake bread any time she wanted to.  She made big fruit cakes too and iced them beautifully.  For our birthdays she always made a special birthday cake and we looked forward to it for months.


​Our entertainments were simple – Dad and Dave and martin’s Corner on the radio, visits to our friends occasionally and visits from them at other times.  When the CWA began in Kokotungo, a dance hall was built, and the dances held there were very enjoyable.  Sometimes there was a orchestra from Rockhampton, but we often made do very nicely with Reg Hutchinson playing his piano accordion.  There were two or three weddings conducted there, one of them was when Uncle Bert married Cath Connolly when he came back from the war.

Before the hall was built, all the meetings, dances, church services and immunisations clinics were held at Mr and Mrs Fred Peggs place, which was just across the road from where the dance hall was.  The “bush Brothers” were the only religious contact we had.  They used to come every couple of months, and we looked forward to their services very much, and they were sometimes accommodated in the Torenbeek home.

This little house,
This old brown house,
Was built by Bert and Bill,
A tribute to their thoroughness,
That it is useful still.

It was built at first in Kumbia,
A town near Kingaroy,
Where it was home to three small girls
And a brand new baby boy.

Board by board it was pulled apart,
And packed firmly on a truck.
Then the brothers set off with their load
And hoped for lots of luck.

For the roads were rough in those
Hard old days, of 1937,
The two way bitumen roads for now
Would have surely seemed like heaven.

It took the brothers just 14 days to
Put it back together,
As neither of them were carpenters,
I call this some endeavour.

The walls and ceilings were left unlined
Until some years thereafter,
And the girls would entertain themselves
By dancing in the rafters.

Then a fair haired baby boy was born
Closely followed by another,
The family had increased by now
To three sisters and three brothers.

But we all grew, lots of work to do,
And schools to be attended
So all too soon (on looking back)
Our childhood days had ended.

Now if you happen to hear sometime
An echo of childish laughter,
Perhaps it's coming from days gone by,
When we children played in the rafters. 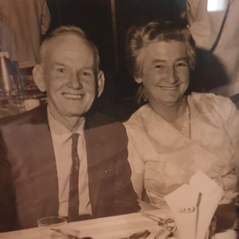